A Deep-Sea, 4 vs. 2 Multiplayer Game with Guns, Gold, and Compulsory cooperation with View to Human Survival Against the Odds

Before playing Depth, I hadn't yet encountered a dedicated multiplayer game (let alone a multiplayer mode in a single-player game) with such a unique set of tantalisingly entertaining variables. Not only does Depth involve diving into the deep blue sea (though it's largely black at these depths) with full knowledge that you're going to have some terrifying encounters with sharks, it also requires that you work as a team with three other players. That makes it four humans that begin diving for treasure as the primary objective, but with the added twist of fighting against and surviving the advances of two player-controlled sharks. I wouldn't want to be on the losing team.

A Tale of Swag, Sharks, and Survival

Don't fret: I talk about "swag" in the title of this section in a purely monetary sense. More specifically, the swag I refer to here is the treasure you're tasked with retrieving. This treasure is the crux of the game's storyline, the only justification for sending four humans to the dark, dangerous depths of the ocean that definitely contains two blood-hungry sharks whose only mission is to stop the four humans' ugly habit of continued existence. If these humans are eviscerated and deprived of certain body parts in the process, then that's a bonus. Literally.

Depth is after all a multiplayer game with a lop-sided twist: four humans against two sharks. The game involves the human team (comprised of three other players and yourself) taking to the depths of the ocean in order to retrieve treasure and,  well, survive to tell the tale. This human team are somewhat bothered throughout their mission by the shark team, which is comprised of two players. The humans are able to gain bonuses for staying alive and acquiring the treasure whilst the shark team is awarded kudos and rewards for their creativity in luring/dividing/conquering/killing the humans.

What this form makes for is some rather interesting gameplay that involves a massive amount of tension and terror as well as requires some tactical gameplay from both sides of the species spectrum. Not to mention the whole thing is reminiscent of the whole opening scene from the 40 Fathoms level of Tomb Raider II, which if I'm not mistaken is the first time I experienced true terror as a child that didn't involve the lack of working locks on the door of my parent's bedroom (if that's not worth a full-on 5-second shudder of disgust and terror in equal quantities, I don't know what is).

Shut up and Dive

Because of the sharks vs. divers format of Depth, the gameplay itself obviously has to be evaluated from two different perspectives. On the one hand you've got the divers, and in playing as one of the four divers that make up the human side of things, you are tasked with finding as much treasure as possible whilst also protecting your underwater robot (called S.T.E.V.E.). These primary objectives are of course accompanied by a secondary one: to survive for as long as is possible.

As a human, Survival is pretty difficult to start with as you're initially only armed with a knife and a simple pistol. Such a rudimentary arsenal is what makes the game incredibly rewarding in the long run as in order to acquire better guns you have to take the risk of exposing yourself in vulnerable areas as you collect treasure from the ocean floor. Better guns can also be purchased, though some of them come at great expense. Continue Reading

When playing as a shark in Depth (check out the website, it's actually got a gorgeous design to it), all you have to worry about is your size, health, and technique, but playing as a diver requires that you utilise the game's expansive array of weaponry if you're going to survive for more than a few seconds in the murky depths. Of course you've got your knife and your pistol that you begin with, but the weapons system in Depth allows for a nice weapons tree for your to explore whilst keeping it very simple.

Your knife is the only free weapon in the game, with others costing increasing quantities of cash (usually) depending on how good they are. The SPP-1 pistol for example, costs $500 whilst the Net Gun costs $1300, the APS Rifle $2000, and the Harpoon $4500.

Other items are that are designed to make your diving life a bit easier are also available for foraging and purchase. Flares can be useful in murky areas (which is just about everywhere in the game if you're playing as a diver), the Sonar Buoy is a good detection tool, and the Shark Shield allows you to remain undetected by some sharks as long as you're within its effective area.

Unlockables are also a feature of Depth and allow you to acquire even more weapons like different variations of the P-11 Pistol (one uses trackable ammunition) and the Spear Pistol as well as useful hardware such as the DPV propulsion system (extremely useful for zipping around at high speed underwater).

What makes the Depth experience rather enjoyable is the simplicity of the combat system. As a diver, you spend most of your time in the classic first-person shooter mode that involves aiming and shooting with the mouse. The game changes a little when an attack is underway however. As a human, when an a shark attacks you simply have to click the mouse as rapidly as possible in order to knife it repeatedly. If you're able to deplete the shark's health before yours is drained (and believe me, it drains extremely quickly) then you emerge the victor.

If you're playing as a shark then you're swimming about in the third-person with stealth being the biggest tool in your arsenal. When on the attacking end of a shark attack, you use the left mouse button to initiate a short-range attack and your right mouse button to start an attack that targets an enemy further in the distance. Got yourself a bite? Now you have to slide/shake your mouse back and forth to simulate the thrashing movements of a shark that has bitten its pray. If you can deplete your victim's health before he stabs you to death with his knife, then you've done very well for yourself.

"Hang on, having four humans against two sharks sounds about fair" I hear you say. Well, there are a number of factors that sort of skew the odds in the shark's favour to say the least. First of all, you've got the gaping underwater trench that is the divide between the movement abilities of the four human players and those of the sharks. Whilst being on the human team does provide you with useful hardware such as weapons and other tools, being a shark means this is your home territory, and you can move almost effortlessly through the water whilst the humans are stuck with their cumbersome diving equipment and silly human hands and feet designed for above-water activities.

When it comes to playing as the shark, however, you've got stealth on your side. You can hide in the depths, emerge to attack, and retire to cover yet again. You move quickly through the water without requiring additional hardware to do so. Your view of the water as a shark is also a little less murky, giving you the physical advantage of simply being able to see a little more.

Make no mistake about this game however: it isn't an easy game for either species to survive in. It's all about who's working together more efficiently and who's able to hang onto the largest amount of health the longest.

The cherry atop the Depth cake for me is the atmosphere that developers Digital Confectioners were able to create through the stunning graphics and atmospheric sounds of the game, as well as the interface of the game in general. The water is generally quite murky and the underwater environment quite intimidating, but the extent of these qualities differs depending on whether you're playing as a shark or as a diver. Notice how the water feels less intimidating when playing as a shark; this is your home territory after all. Now notice how gloomy and claustrophobic each nook and cranny feels when you're playing as a diver.

It is this atmosphere, coupled with the thumping of your heartbeat when playing as a diver, that is the source of much of the tension in Depth. The combat system may be a little simple for some people's tastes, but this allows more of an emphasis on tactics.

A recent update to Depth has woven in an extra mode that shark fans will love: the Megalodon Hunt. This allows you to experience the fantastic gameplay of depth but in a 5 vs. 1 scenario, with 5 humans facing off against what is currently said to be an extinct species of Shark. This mode is much more difficult when playing as the shark because of the sheer size of the creature. Whilst the smaller sharks in the game can use stealth and agility, the size of Megalodon makes it difficult to get in and out of an attack with any speed - if you don't kill with the first attack, you're almost certainly going to end up as a dead shark.

So, you've got a multiplayer, 4 vs 2 (humans and sharks respectively) set in the murky depths of the ocean with a nice weapon/unlock tree, multiple shark types, and some seriously terrifying atmosphere. What's not to like? Depth is a fantastic game any way you look at it, and one that makes you actually want to repeatedly run the risk of getting mauled by a dangerous creature. 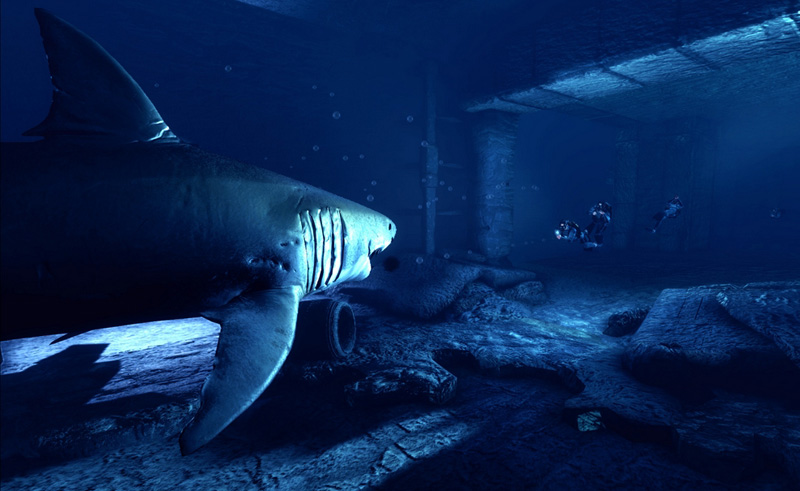 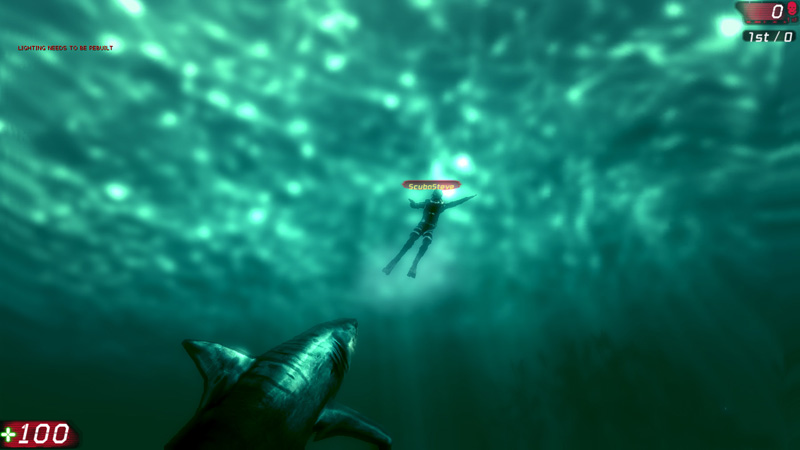 Depth is developed by Digital Confectioners.