Don’t Pick Up a Penguin

How hungry is hungry? If we’re talking peckish, or having a small hankering for a Nutrigrain Elevenses, then I don’t think this is quite hungry enough to even begin imagining the ravenousness of the titular shark in Hungry Shark: Evolution, because boy is this shark after a meal. And by meal I mean consecutive meals, over and over, until he levels up and eventually evolves into a different kind of shark altogether. Now, tell me about how hungry you are when you’ve got a shark eating enough to make him undergo the process of evolution within the space of a few minutes: that’s pretty damned hungry, I think we can all agree. This is why no matter how hungry you may be, it’s always a good idea to pick up your mobile media-playing device and give this shark in question a good old feeding, since not only will you be doing him a favour by keeping his appetite at bay for a few more minutes, you’ll also be letting the best shark attack game available in the app market entertain you and brighten up even the gloomiest day a bit so that you can at least say “oh well, at least I wasn’t eviscerated by a hungry shark today. Continue Reading

I Think I’m Having a Shark Attack 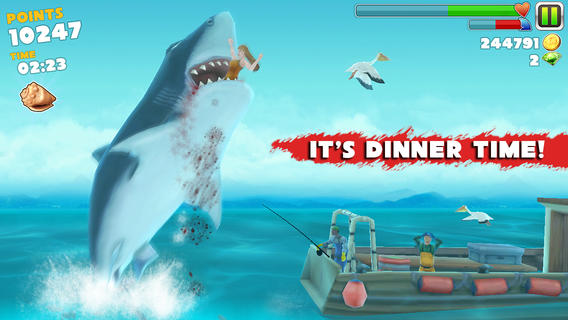 By what means do you go about your daily shark business doing typical shark stuff in Future Games of London’s Hungry Shark: Evolution then? Well, you’ve got a choice between controlling the action with either an on-screen joystick or using your mobile device’s accelerometer and tapping the screen to initiate the shark’s trademark boost. So those are the means of sharking about, but what does sharking about entail? Apart from lots of blood and violent dismemberment of anything in sight, your responsibility is to explore the expanse of water that is available to you, looking for suitable pray to keep your health meter in the right hand corner as full as possible. You gain experience points over time which allow you to level up and eventually evolve into a bigger, better shark, and you also collect various things like coins to purchase upgrades, conches to unlock missions, and various multiplier bonuses depending on how many creatures and humans you manage to eat consecutively.

There are many features of Hungry Shark Evolution that developer Future Games of London has (as a collective) ensured makes it a supremely different experience to standard shark games such as the flash-based Prehistoric Shark. The fact that you can evolve into different types of shark gives a good bit of replay value and initial longevity; it can be fun to roam the underwater environment as a tiger shark, or even as the ancient megalodon. Shark upgrades can be fun to save up for and purchase as well, letting you upgrade things such as your bite or your boost so that you can become more efficient at being the killing machine that you are. It is a refreshing change from the norm that you can be attacked and harmed by some creatures (jellyfish or humans, for example), making it essential that you pick your pray wisely and not just try and mindlessly devour anything in sight. The underwater element of the game is also quite extensive, allowing you to go to considerable depth to hunt for your pray as well as comb the surface for silly humans thinking they’re going to live any longer than the next 30 seconds of their life.

The game’s graphics and its design are features that are as impressive as its gameplay. The bright colours and detailed illustrations/animations of the sea creatures make it feel like you’re in Finding Nemo, that is until you chomp up a whole human in your jaws with accompanying blood and sounds of bones crunching. The start contrast of the calming underwater environment and the harrowing turmoil of humans and marine creatures alike being scoffed up in a brutal fashion is quite mesmerising and, along with the upgrade progression, additional items, and evolution of your shark, makes it the very best shark attack game you can possibly hope to play.

We have also discussed a possible sequel to Hungry Shark Evolution here, why not join in the discussion with us?

Hungry Shark Evolution is developed by Future Games of London.